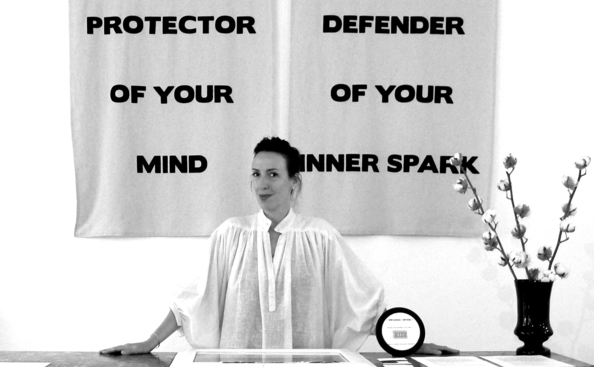 Melissa Unger is a creative entrepreneur, consultant, writer, artist and the Founder & Creative Director of Seymour Projects. In this latter role, Melissa spearheads the conception, design and production of the collective’s multidisciplinary projects, most notably its largest project to date: the SEYMOUR+ space. She leverages her experience, techniques, and vision towards her goal of nurturing human consciousness in a world increasingly dominated by technology.

Prior to founding Seymour Projects in 2011, Melissa, a Franco-American, built a prolific 20+ year career in media, arts, and public service, working with and consulting for internationally recognized organizations including Tribeca Productions, Disney’s Jumbo Pictures, The Ad Council, Galerie Thaddaeus Ropac, artnet, and the Creative Growth Art Center. Melissa has also held positions on the production crew of a number of acclaimed feature films and been the personal assistant to actors Robert De Niro and Daniel Day-Lewis.

Her years of collaborating with creatives, futurists, and leading minds from a wide range of fields, coupled with a decade of her own psychosocial exploration have afforded Melissa unique insights that she strives to communicate in a meaningful manner. Via Seymour Projects and all of her work, she endeavors to leverage creative ideas and concepts to effect positive social change, promote social cohesion; empower and inspire.

Melissa is regularly invited share her perspective on a variety of topics linked to her professional experience and the Seymour Projects mission. Her talks often help others to shift perspective and to see more possibilities for themselves. Seymour = see more.

++ Melissa enjoys being an active member of the Kinnernet and DLD communities. She is also a member of evolutionary behavioural scientist Tamás Dávid-Barrett’s international discussion group Human Beast.

To read about Melissa’s other projects, vist: melissaunger.me