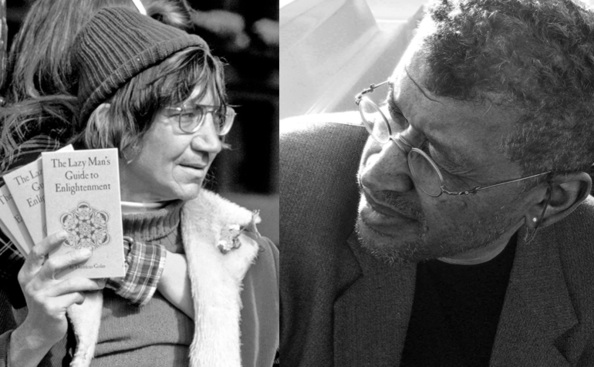 Important:Seating is limited.
To reserve your spot, please send an email to nora@seymourprojects.com

We are pleased to announce that Sylvain Despretz publisher and friend of the author Thaddeus Golas (1924-1997) will join us at the SEYMOUR+ space on November 21, 2016.

In this conversation, hosted by Melissa Unger, Sylvain will explore a variety of topics linked to Golas’ seminal work as well as discuss his own personal experience with expanded consciousness. Both men are united by many things, but perhaps most notably their belief in the importance critical thinking and autonomy when exploring the metaphysical. Golas and Despretz make no attempt to “tell others what do to”, but instead, simply encourage us to map out our inner spaces and give us the language needed so that we may feel safe as we expand into greater realization of our fundamental nature.

Thaddeus Golas is an underground author who stands out from the pack of ‘popular mystics’. Golas wrote The Lazy Man’s Guide to Enlightenment in 1972, long before a Self-Help section was designed to accommodate such books. The text became a self-publishing phenomenon in the San Francisco Bay Area and influenced many Western authors of popular spiritual literature. His brief, cogent manual offers accessible and reliable advice for navigating inner and outer states. He favored a path “that was available to all”, and distanced himself from any suggestion that enlightenment require effort, discipline, or any particular set of ideas.  The Lazy Man’s Guide to Enlightenment has remained in print for 40 years and has been translated into seven languages, including French, recently.

Sylvain Despretz is a freelance director-screenwriter with a background in art and illustration. Sylvain began his career at New York’s prestigious BBDO advertising agency. His formative years as an illustrator were mentored by the late world-renowned graphic novel artist Jean “Mœbius” Giraud. For two decades, Sylvain has brought his unique style of storyboards and concept art to the work of film directors Ridley Scott, Roman Polanski, Tim Burton, J.J. Abrams, Mike Newell, Darren Aronofsky, David Fincher and Stanley Kubrick, among notable others. He is founder of Seed Center Books.